You are using an outdated browser. Please upgrade your browser to improve your experience and security.
Amy Klobuchar
United States senator
Media
Print
Thank you for your feedback

Amy Klobuchar, in full Amy Jean Klobuchar, (born May 25, 1960, Plymouth, Minnesota, U.S.), American politician who was elected as a Democrat to the U.S. Senate in 2006 and began representing Minnesota the following year. She was the first woman to be elected to serve the state in that body.

Britannica Explores
100 Women Trailblazers
Meet extraordinary women who dared to bring gender equality and other issues to the forefront. From overcoming oppression, to breaking rules, to reimagining the world or waging a rebellion, these women of history have a story to tell.

Klobuchar grew up in a suburb of Minneapolis–St. Paul, Minnesota. Her father was a columnist for the Star Tribune newspaper, and her mother taught elementary school. Klobuchar, who was the valedictorian of her high-school graduating class, attended Yale University, from which she graduated magna cum laude in 1982. Her senior thesis, “Uncovering the Dome,” about the politics behind the building of the Hubert H. Humphrey Metrodome in Minneapolis, was later published as a book (1986). After earning a law degree (1985) at the University of Chicago, she served as legal adviser to former vice president Walter Mondale, who encouraged her to embark on a career in politics. About that time she married John Bessler, and the couple later had a child.

In 1998 Klobuchar was elected attorney of Hennepin county, the county seat of which is Minneapolis, and she held the post from 1999 to 2006. During that time she served as president of the Minnesota County Attorneys Association. In 2006, following the announcement that U.S. Sen. Mark Dayton would not seek reelection, she entered the race for his seat, running on the Democratic-Farmer-Labor Party (DFL) ticket. She defeated her Republican opponent by a substantial margin and took office in 2007.

Once in the Senate, Klobuchar established herself as a political liberal who typically voted with her party, though she displayed a willingness to engage in bipartisan negotiation. She negotiated a major funding package to rebuild a highway bridge that had collapsed over the Mississippi River in August 2007. She also championed numerous farm bills, befitting an agricultural state, and took special interest in veterans’ affairs. In addition, she was involved in a significant revision of the Senate’s ethics rules, as well as international commerce initiatives and efforts to improve funding for science, technology, engineering, and mathematics education at the secondary and university levels. Klobuchar earned high marks for the transparency of her office. Extremely popular in her home state, she easily won reelection in 2012 and again in 2018. The following year she announced that she was seeking the Democratic presidential nomination in 2020. 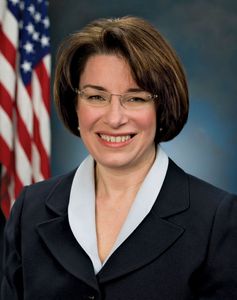